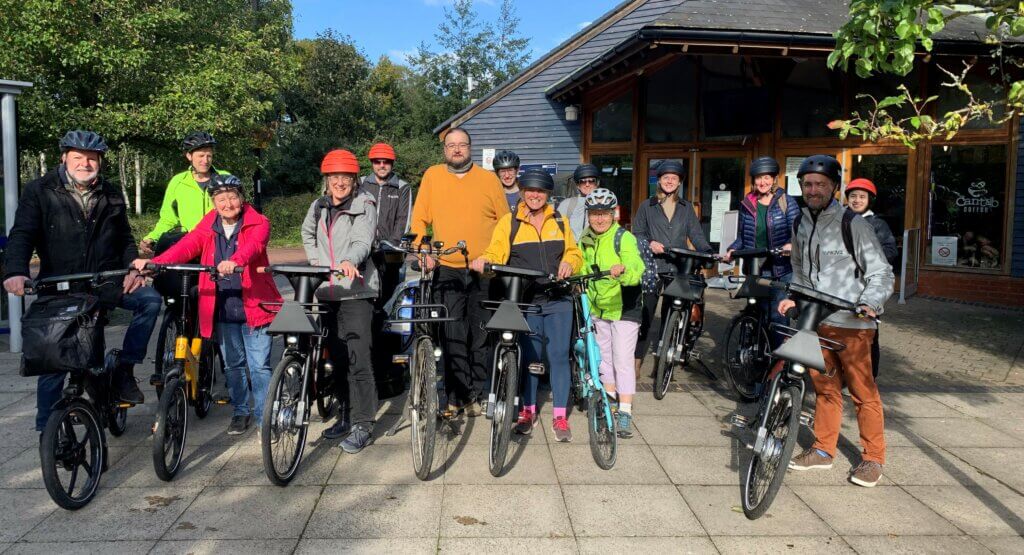 An electric bike ride from Cambridge to Swaffham Prior to highlight a landmark retrofit scheme has taken place to mark the global climate change conference, COP26.

The event organised by Cambridgeshire County Council and the Cambridgeshire & Peterborough Combined Authority saw riders saddle up in Cambridge yesterday (Thursday) before heading off to Swaffham Prior, nine miles away.

The village is on track to become the first in the UK to switch off oil and move onto zero-carbon heating. This will be through ground source and air source heat pumps to heat homes.

COP26 is the global climate change conference being held in Glasgow from 31 October to 12 November, with world leaders arriving to discuss measures to reduce rising temperatures. The bike ride was held to highlight the efforts being undertaken in Cambridgeshire to make the county net carbon zero, with riders using either an electric or non-electric bike.

The county council – which declared a climate emergency in 2019 – has set a target to cut 50% of its own direct carbon emissions by 2023 and it is on track to achieve this. For the wider Cambridgeshire area, the aim is to bring forward the net zero by 2050 target towards 2030.

One of the projects which will help the council reach its goal is the one being undertaken at Swaffham Prior, which includes an energy centre being created on land adjacent to Goodwin Farm off Heath Road, and a renewable heat network being installed beneath the village streets. The council is progressing the project along with its technical partner Bouygues Energies & Services.

The 15 riders who arrived in the village at around 1.30pm yesterday (Thursday) – after setting off from Newmarket Road Park and Ride an hour earlier – and other invited guests were then given the chance to tour the energy centre, where construction has just started.

Ground source heat pumps will be used to extract heat from the ground through a series of underground pipes. In warmer seasons, air source heat pumps will be used to absorb heat from the outside air which is then absorbed into a fluid. The fluid gets passed through compressors (a bit like a fridge in reverse) that increase the temperature, which in turn is used to heat the building and water circuits.

Councillor Lorna Dupre, Cambridgeshire County Council’s Environment and Green Investment Committee chair, said: “With so much focus on the environment for COP26 it was great to be able to showcase some of the innovative work being done in Cambridgeshire to tackle the climate emergency.

“As a council we are making huge strides to become net zero carbon, whether through retrofitting our public buildings such as schools and libraries, investing in solar farms or innovative schemes such as the one at Swaffham Prior which is UK-leading.

“I would like to thank everyone who joined the bike ride from Cambridge and the tour of the new energy centre along with BEIS who helped us fund the project and partnered with us and the Community Land Trust which helped to bring this project forward. It’s so exciting to see it starting to come together after four years developing the project with the Community Land Trust. I can’t wait until it is in operation.”

David Carr, CEO of Bouygues E&S Solutions who are delivering the renewable heat network in Swaffham Prior, said: “It’s an honour to be part of this event today to shine a light on the great strides our partner Cambridgeshire County Council is making to meet their ambitious Net Zero targets. We are delighted to have the opportunity to show the great progress our team has been making to deliver this innovative, renewable heat network which will significantly reduce the villages’ carbon emissions.”

Dr Nik Johnson, Mayor of Cambridgeshire and Peterborough, said: “In the week that the Government announced its plans to cut greenhouse gas emissions and Cambridgeshire and Peterborough Independent Commission on Climate produced it final recommendations to the Combined Authority for a just transition to net zero carbon for the region, I am delighted that this COP26 Bike Ride is able to highlight some of the excellent local activities already going on in our county.

“We know we need to do so much more but by showcasing good practice be it community heating or using bikes and e-bikes to actively travel, we show what the norm is becoming and we can encourage change. I am committed to tackling this climate crisis and will continue to push for change and showcase great examples of communities, business and individuals who are leading the way in the fight for a greener future of our planet.”

Matthew Pencharz, Head of Public Policy for UK, Ireland & Benelux for Voi, said: “Ahead of COP26 in Glasgow next month, it’s important we showcase how making everyday changes, like using greener and convenient transport, can make a big and positive difference to the environment.

“Domestic transport represents nearly a quarter of all UK greenhouse gas emissions, more than any sector across the economy, and over half of which comes from passenger cars. Micromobility, much like finding green solutions to power our towns and cities, is crucial in helping the council achieve its net-zero targets by reducing carbon emissions from replacing cars and supporting public transport.

“At Voi, we’re committed to climate-neutral mobility and are delighted to be working with the council to help tackle the climate crisis so we can create better places to live.”

People are now being encouraged to cycle the route from Newmarket Road Park and Ride to Swaffham Prior during the half-term school holidays. Those who do so are being asked to post a picture on social media with the hashtag #CambsCOP26ride

People can access the cycle route using the CycleMaps app or the web-based Cycle Streets.