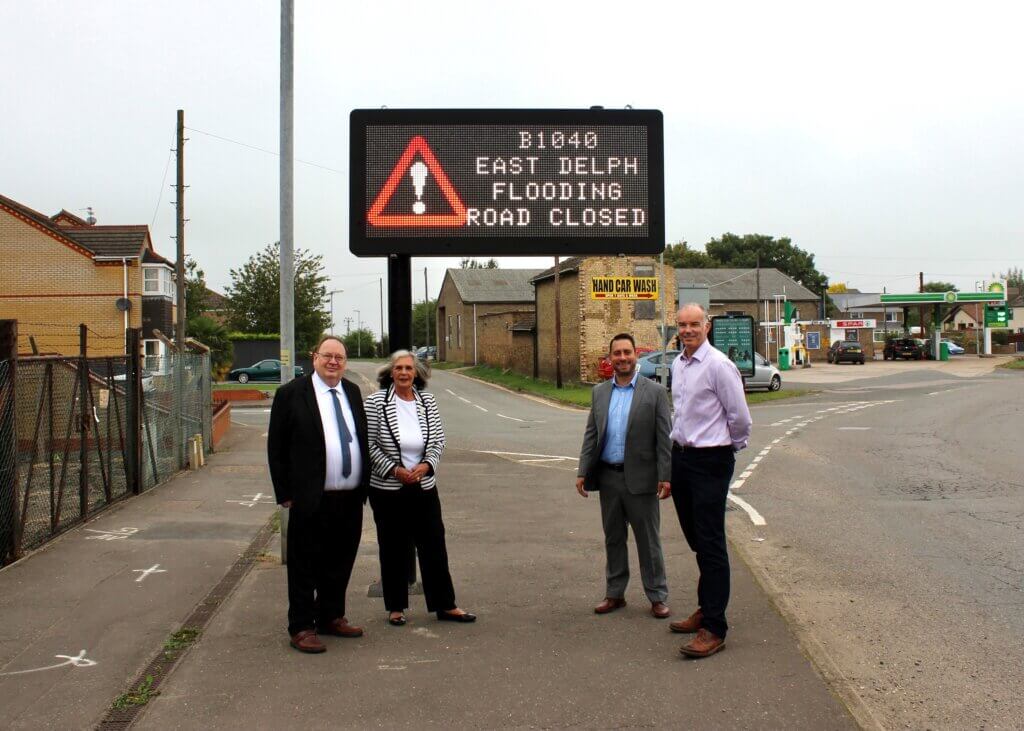 Interactive highways signs to improve travel and safety in and around Whittlesey are now fully operational in the town.

The three new variable highways message signs along East Delph and the A605, east and west of the B1040 roundabout, alert drivers when flooding closes the B1040 and/or North Bank alongside the River Nene.

The signs will also warn motorists when the nearby A47 is closed by accidents and when there are emergencies or roadworks affecting traffic in the area.

The highways signs were installed as part of the Whittlesey Growing Fenland Masterplan Project, led by Fenland District Council in partnership with Cambridgeshire & Peterborough Combined Authority and Cambridgeshire County Council, along with stakeholders from the community and local councils.

A total of £57,500 was awarded for the signs by the Combined Authority, led by Mayor Dr Nik Johnson, with yet more Combined Authority funding secured for initiatives of major importance to the community, including £500,000 for the new Whittlesey Heritage Visitor Centre, £218,169 for the Whittlesey Heritage Walk, and a business capital grants scheme.

“Investing in Whittlesey and Fenland is a top priority for me, and I’m delighted that this warning system which can soften the impact of flood disruption on local communities is now live. It will reduce some stress for people when water levels rise.

“It’s one vital part of the million-pound investment the Combined Authority is putting into this unique market town, helping people to celebrate their own heritage and location, and attract visitors to come in and enjoy Whittlesey too.”

The Whittlesey Masterplan is one of four separate Growing Fenland Masterplan Projects, all funded by the Combined Authority, for Fenland’s market towns – Chatteris, March, Whittlesey and Wisbech.

As well as helping to reduce the impact of seasonal flooding at the Whittlesey Washes, the signs will help to mitigate delays caused by the current major improvement works at the Kings Dyke Level Crossing and A605 improvements at Milk Water Drove.

Longer-term, they will complement the completed Kings Dyke and Milk Water Drove projects and also support the prospect of a new southern relief road.

Cllr Dee Laws, town and district councillor for Whittlesey and Chairman of the Whittlesey Growing Fenland project, who has campaigned for interactive flooding signs in the area for 12 years, said they are a fantastic new addition to the town.

“The Whittlesey Washes flood storage reservoir plays an essential part in protecting nearby communities from flooding, but when high levels of water cause the B1040 and North Bank, Peterborough, to close it can be a headache for motorists,” she said. “These new signs will alert drivers when the roads are closed owing to flooding and when other roads nearby are affected by closures or delays. They will enable better planning for travel at the earliest opportunity, helping improve the quality of life for residents and visitors in the area.

“I’m delighted the signs have been made possible thanks to the Whittlesey Growing Fenland Masterplan Project and investment from the Combined Authority.”

Leader of Fenland District Council and Cabinet member for finance, Cllr Chris Boden, who is also a town, district and county councillor for Whittlesey, said: “The Whittlesey Masterplan took into account the views of residents and businesses to help identify what our town and local economy needed most. These new signs are one of a number of schemes identified which will help make a big difference to the lives of local people.”