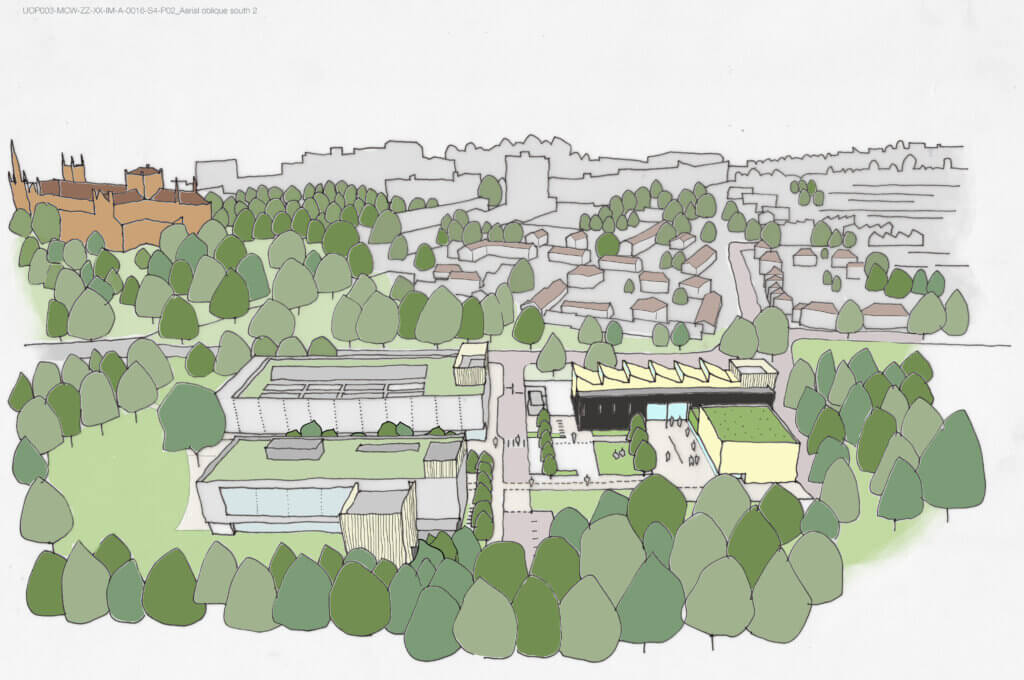 A consultation on plans for a second teaching building featuring a ‘Living Lab’ public science centre at Peterborough’s new university begins next week.

The proposed development would form a third phase at the ARU Peterborough university campus, which is being built on the north of the Embankment site, off Bishop’s Road.

People will be able to find out more about the proposed development and give their opinion on the plans before an application for planning permission is submitted to Peterborough City Council in September.

The second teaching building is planned on the site of the Regional Pool car park and next to first teaching building which is opening to students in September. The other building on the developing campus, the Innovation and Research Centre, is under construction.

Alongside additional teaching space for ARU Peterborough, the Living Lab part of the proposed building will offer an open, interactive science centre and education space to creatively engage people in science and technology. It is planned to play host to events, exhibitions and flexible learning, including festivals of ideas, immersive displays, hackathons, forums and evening classes. The Living Lab will aim to add a new cultural attraction to the city for both local people and visitors.

The consultation will begin on 8th August and the deadline for feedback and comments will be 22nd August.

An opportunity to find out more and have a say is available both online and at two events. Information and a feedback form can be found online from August 8 at arupeterborough.co.uk/have-your-say

The consultation events, where representatives will be on hand to answer questions, are at the Peterborough Cathedral Visitor and Learning Centre on:

The feedback from the public will be considered as part of developing the plans before submitting. The public will then be able to comment to the city council on the planning application as part of the usual planning process.

Mayor Dr Nik Johnson said: “It is important we hear the views of local people before planning permission is put in for this second teaching building and Living Lab. I would encourage anyone with an interest in ARU Peterborough and its development to take a look online or drop in to one of the consultation events.”

Prof Ross Renton, ARU Peterborough Principal, said: “We are looking forward to these ambitious plans going on display to the people of the city and the wider region, who will be the main beneficiaries of the new university, including the Living Lab.

“I encourage members of the community to come along to the cathedral to find out more about this transformative development.”

The university forms part of the Embankment Masterplan being developed by the City Council which aims to maximise the potential of the area for leisure and culture.

Funding is in place for the second teaching building, including through £20 million from the Government’s Levelling Up Fund.