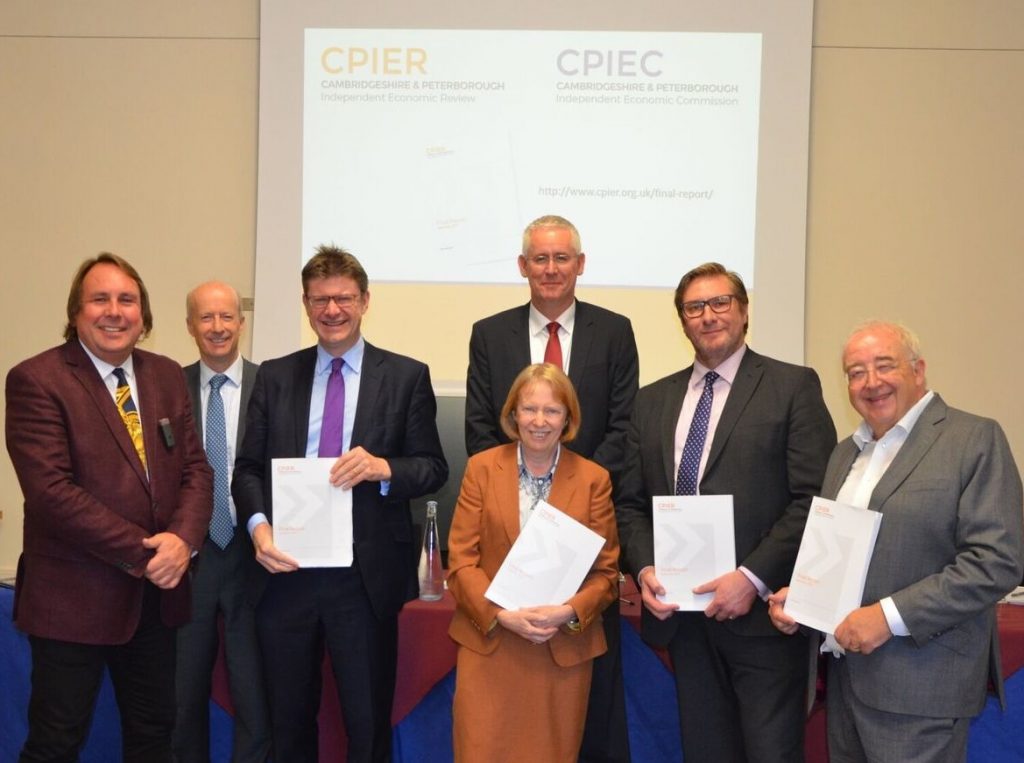 Mayor of Cambridgeshire and Peterborough James Palmer has urged the Government’s Business Secretary Greg Clark to match his ambition for growth in the area, following the official launch of an in-depth report into its economic future.

The final report of the Cambridgeshire and Peterborough Independent Economic Review (CPIER), an independent study led by leading economists, business people and academics, was presented at The Royal Academy of Engineering on Tuesday (October 9). The event featured an address by the Business Secretary who praised the CPIER report and said that the Cambridgeshire and Peterborough economy was crucial for the UK as a whole and for the Government’s own Industrial Strategy. He also said he was a supporter of further devolution and more local decision making to better seize opportunities and tackle challenges like the ones outlined in the report.

In response Mayor James Palmer said that he stood ready to meet the challenges to the economy raised in the CPIER report. His key message to the Secretary of State was to match his ambition, through both investing in the Cambridgeshire and Peterborough economy, and through further devolution of powers, to enable the Combined Authority to meet the housing, transport and skills challenges raised in the report.

The Mayor has already publicly supported many of the recommendations in the CPIER study. That includes the recommendation to increase house building targets in Cambridgeshire and Peterborough from about 4,700 per year to 6,000-8,000 per year, as well as the need to urgently upgrade rail and road infrastructure, including the A47, A10 and M11, as well as the delivery of the Cambridgeshire Metro.

“The report was also clear that the serious challenges our economy faces with a lack of housing of all types, of under investment in transport infrastructure, and skills shortages, cannot just be tackled locally, but also requires the support of central Government.

“That’s why it was so important to present this report to the Secretary of State, including my plans to tackle the issues it identifies. This was an opportunity to say to the Secretary of State that we have a remarkable economy, that is a hub of innovative and dynamic enterprise with businesses that are among the world’s best.  Furthermore, we now have an independent and in-depth evidence base to make a compelling case for action.

“The danger is that if we do not take action, our economy risks tailing off, and our internationally significant businesses may seek to relocate, not to other parts of the UK, but overseas, to Europe, the US and East Asia and dealing a significant blow to UK plc.

“I have always been quite clear that given that Cambridgeshire and Peterborough contributes a net £5 billion per year to the Treasury, our economy deserves to see a bigger proportion of that tax revenue returned as investment into our economy.

“The ‘Northern Powerhouse’ and the ‘Midlands Engine’ seem to attract the most attention from Government, but it is Eastern Enterprise which is driving the economy and creating the funds that are being invested in the North and the Midlands. This report shows that without significant investment in our own economy, we are in danger of seeing our exceptional growth stall.

“But this is not about simply asking for more money. My message to the Secretary of State was that we need your help to allow us to help ourselves. We need further devolution of powers to the Combined Authority to give us the tools we need to push our economy forward, something which was also highlighted in the CPIER report.

“That includes the powers to create mayoral development corporations, and to use mechanisms like tax increment financing through fiscal devolution which will help create investment funds to lever the private sector investment needed to build more houses, and deliver ground-breaking and transformational transport infrastructure like the Cambridgeshire metro.

“I make no apology for being ambitious, and I think that bold and decisive action is needed if we are to continue the Cambridgeshire and Peterborough economic success story into the future.”

The Devolution Deal with Government, secured in March 2017, included a target to increase economic output by nearly 100% in the next 25 years, from £22bn to over £40bn. The CPIER report highlights the actions needed to achieve this and to make the region a leading place in the world to live, learn and work.

The Combined Authority will work with local industry to agree this area’s main priorities for future action and investment on the back of the report to produce the Local Industrial Strategy. The strategy will be owned by the newly formed Business Board made up of industry leaders from across the county who met for the first time last month.